Armenian singer Lilu preparing a surprise for your fans 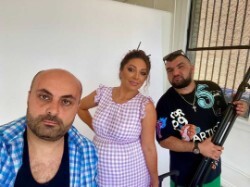